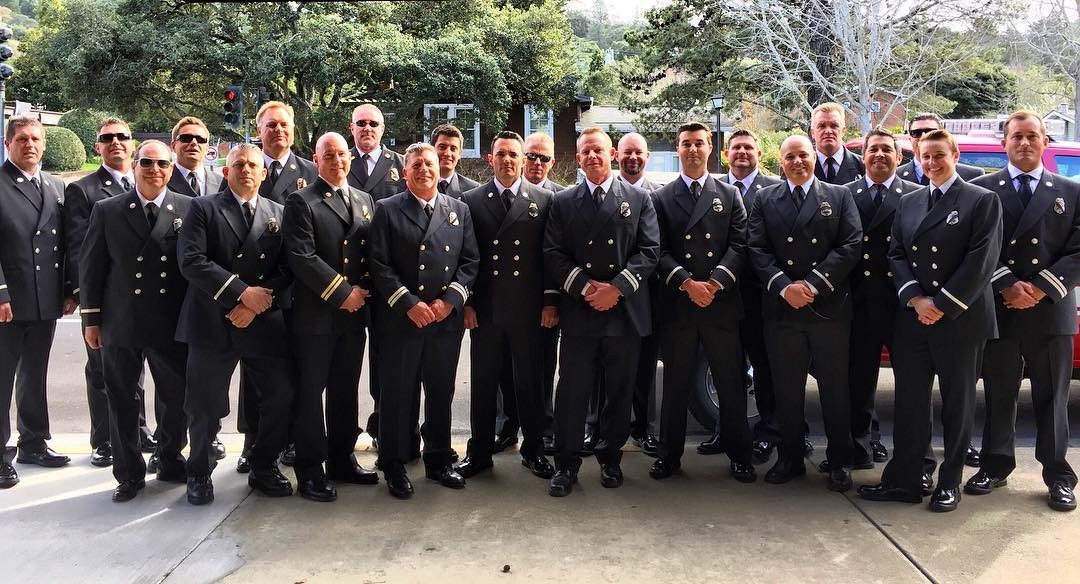 Members of Central Marin Fire on hand for the celebration of life for former Larkspur Fire Department Chief Craig Shurtz.  Chief Shurtz began his career in 1961 and became Fire Chief in 1968 at the age of 27.  Thank you Chief for having such a positive impact in so many lives over the years.

William Craig Shurtz, a Marin native and former Larkspur fire chief, died Jan. 29 at his home in Larkspur. He was 76.

Serving the Larkspur fire department from 1961 to 1982, Mr. Shurtz, known as Craig, rose through the ranks and became fire chief in 1968 at age 27. He helped develop the fire department's mutual aid and 911 systems, allowing universal telephone access to emergency services.

"Chief Shurtz was a progressive fire services leader for the time, who moved the fire department into the modern era of firefighting," said Robert Sinnott, deputy fire chief of the San Rafael fire department. Sinnott landed his first job in fire service as a cadet under Mr. Shurtz. Sinnott would eventually become fire chief of Larkspur, the position he held before moving to San Rafael.

"Chief Shurtz is responsible for my career, and for that I am thankful," Sinnott said. "He was very near and dear to me."

Mr. Shurtz was born June 16, 1941, and was raised in Marin City and Mill Valley. He was the son of Lyle Ray and Lottie Shurtz. He and his brothers Ray and Lyle Shurtz attended Tamalpais High School.

In 1962, he married his wife Carole McBride of San Rafael. They lived in Larkspur, where they raised their sons Steven and Scott.

Scott followed in his father's footsteps, joining the Larkspur Fire Department in 1991. He became fire chief in 2016 and led the merging of Larkspur and Corte Madera departments into the Central Marin Fire Department.

"Scott is evidence of his father's legacy and the quality with which he lived his life, cared for his fire department and his family," said Tom Forster, the fire chief at George Lucas' Skywalker Ranch. Forster also was hired as a teen cadet by Mr. Shurtz.

"He was a dignified and quite man," Forster said. "He was very bright, and we all had a great deal of respect for him. We will all miss him very much."

Longtime San Rafael fire chief Bob Marcucci said, "(Mr. Shurtz) cared about what he did, there was no question about that. His dedication was to Larkspur and making Larkspur the best he could make it."

Mr. Shurtz spent many years coaching little league teams and participating in the Lions Club. After retiring as fire chief in 1982, he stayed busy with a second career managing and maintaining apartment buildings throughout Marin.

"As a father, he was quiet but authoritative and rarely offered unsolicited advice, but whenever he was asked for guidance he would gladly share from his lifetime of experiences," Scott Shurtz said. "He was just as likely to share his failures as his successes if he thought it would help."

He said, "Although our careers were separated by more than a decade, I feel like I learned a lot about leadership and responsibility by paying attention to his career during my childhood. I know that the firefighters that worked with him saw his hard exterior but I hope he is also remembered for his soft heart and devotion to his family."

Carole Shurtz said it has been a gift to be part of the fire department family for so many years.

"Since 1961 we have enjoyed the support and love of this special group," she said. "It was such a large part of our social life, especially in the 60s and 70s. It's hard to describe how much it has meant to us over the years."

In addition to his wife and sons, Mr. Shurtz is survived by his daughters-in-law, two grandchildren and a large extended family.

A celebration of his life will be at 3 p.m. Feb. 18 at the Corte Madera Community Center at 498 Tamalpais Drive. Memorial contributions may be made to Hospice By the Bay.